Thermal desorption is a technology that is based on the application of heat to volatilise and/or break down the organic compounds that are adhered to soil.

Thermal desorption is a non-destructive process causing the physical separation by heating soil to temperatures ranging between 90 ºC and 540 ºC, in order to volatilise and/or decompose adhered organic pollutants and/or volatile heavy metals (such as mercury), without altering the soil structure. The result is that the soil treated with this technology can be used later for several purposes, such as fill material at the site itself or be deposited in landfills for inert waste.

Thermal desorption differs substantially from incineration because in addition to operating at a lower temperature, the process does not modify the physical structure of the soil, a crucial aspect for its reuse. 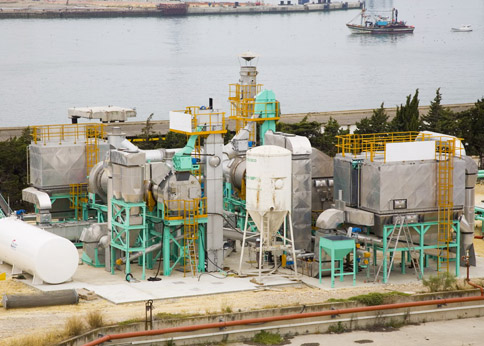 Operation of the Thermal Desorption Unit

A typical thermal desorption plant has the following elements:

The material treated, once cooled, is analysed to verify the treatment objectives. The percentage of reduction obtained by this technique is more than 95%.

The Thermal Desorption Unit of Emgrisa

Since 2008 Emgrisa owns a mobile thermal desorption unit that has been used to treat hydrocarbon impacted soils on site and provided a quick, economical and environmentally appropriate solution to contaminated land, sludge and other hydrocarbon wastes.

The Thermal Desorption Plant for Emgrisa was designed in-house: Patent of Invention Nº 200702870/C of 16/06/2010, by “system of thermal decontamination of soils”, with a design characterised by its high capacity (up to 30 t/h) and yields exceeding 95%, as well as low energy consumption (less than 60-70% compared with conventional technology) and an advanced gas treatment system capable of complying with the most stringent emissions regulations.

This plant has been used in large projects for the recovery of sites, both nationally and internationally.