Thermal desorption is proving to be one of the best techniques for the treatment of large quantities of soil impacted by the presence of organic compounds such as hydrocarbons, organo-chlorides, etc, both in time and in cost. Knowing this, Emgrisa improved the existing technology and has designed a system that can treat up to 30TM/hour while lowering the use of fuel to less than 60-70% compared with conventional technology, allowing even for the reuse of fuels generated through the process of decontamination. The success of this innovative technology has resulted in the participation of several projects that have been carried out or that we have been requested for collaboration. Amongst them is the decontamination of a site belonging to the Kuwait Oil Company, through our contract with AG ENVIRONMENTAL HERA Holding. The project developed according to the following main phases:

Maintenance and disassembly of the thermal desorption plant

A complete maintenance and overhaul of the system was done taking into consideration the strict working conditions of the new site, improving the installation with modifications such as:

This phase ended with the loading of the equipment onto 28 trucks, which took place from 12 to 21 June 2013 and transported to the port of Valencia for shipping to Kuwait.

Installation and start up

The installation phase in Kuwait began with the mobilization of Emgrisa personnel to the country on August 17th, 2013. The site was located in the desert within the Burgan Oil Field and close to the city of Kuwait. The actual assembly did not begin until August 25th due to the delays in obtaining all the necessary authorizations and permits. The assembly itself was not without difficulties especially coinciding with the hot summer temperatures which conditioned the hours of actual work. Despite this, the installation of the plant took 31 days to complete and the start up commenced within the agreed schedule. 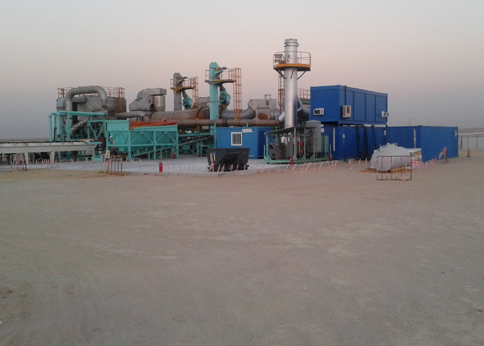 Joint operation of the facilities

On November 21st, the plant went into operation, starting with the treatment of stockpiled contaminated soil. This was soil contaminated by oil spills occurring over many years in the Burgan oil field.

In the period between November 2013 and April 2014 the plant has treated approximately ten thousand tonnes of hydrocarbon contaminated soils.

This project represented a major challenge for Emgrisa as it involved a comparison of its technology with that currently existing in the international market and the results have caused a significant degree of satisfaction such as, the successful treatment of soil containing elevated concentrations in heavy hydrocarbon fractions (asphalts).

Currently major projects being undertaken include: